How To Steal the World - post from Cinema Retro

I was doing a bit of McCallum movie research and saw the link to the Cinema Retro post about "How to Steal the World".

Now that I have seen HTSTW (nope, I haven't watched all of the non-US releases yet, but I remember having watched the "Seven Wonders" episodes), I realiized the poster graphics weren't a particularly good representation of the movie. Though "The Seven Wonders of the World Affair" was the series finale, you would think a bit more effort would have been made with the poster design; and, gees, you would think someone would have noticed that "Carroll" wasn't spelled correctly!

For those who haven't seen the movie, I am sorry to report that Illya's ill-fated maroon jacket never made an appearance. Thank you very much, MGM/Arena, for the leather jacket and Raybans, though. Besides Illya's re-run wardrobe, no favors were done for poor Napoleon, either. In at least a third of the movie, he was wearing the same blue jacket outfit from "The Spy with My Face".

I must admit that I had forgotten the strangeness of the fourth season episodes. While grandkitty and I watched the movie, I felt saddened by how much of the lifeblood had been drained from the series. Where was Napoleon's sparkle and charm? Where was Illya's witty snarkiness? For most of the movie, Illya was there as Napoleon's chauffeur and a somewhat scrappier agent than in many of the post first season episodes.

As the guys' clothes were re-runs, portions of the special effects were re-runs as well. The big booms at the end of the movie looked very much like the big booms from the pilot, "The Vulcan Affair".

Although "The Return" wasn't perfect and isn't a great favorite to some fans, I have to give it props for not abandoning the guys' story in such a terribly lackluster way. That said, flaws and all, the movie was an international hit according to the mini-article from Cinema Retro which speaks well about the popularity of our favorite guys. 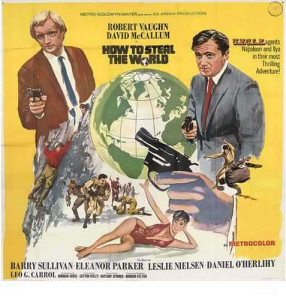 On June 18 at 4:15 AM (EST), Turner Classic Movies (North America) will present the 1968 Man From U.N.C.L.E. feature film How to Steal the World starring Robert Vaughn, David McCallum, Leo G. Carroll and Leslie Nielsen. The feature film was comprised of the two-part episodes titled The Seven Wonders of the World Affair, which represented the final broadcasts of the show in January, 1968. The film was not released theatrically in America, but was a hit in international markets. The TCM broadcast will be immediately followed by an MGM production short for the 1966 film Around the World Under the Sea starring David McCallum, Lloyd Bridges, Brian Kelly and Shirley Eaton.

(Posted by Cinema Retro in UNCLE HQ)
Tags: how to steal the world, movie
Subscribe