What song causes you to reflect?  What song makes you instantly smile?

I think it is a safe assumption that 40-plus years later, we remain drawn to MFU because of Napoleon & Illya.

Whether you slash them or not, I also think it's a safe assumption that the majority of us see a connection between the boys.

In the year 2013, would a reboot movie do better financially, critically and/or in audience satisfaction if The Partnership was the major focus?

What would happen if the reboot simply treated the fact that the boys love each other as a matter of fact?  Agape, eros or philia...would The Partnership put butts in theater seats?

Where is the TV remote?

Coke or Pepsi (or the diet versions)?

I was on ebay.com just now, trying to find that picture Svet. posted the other night (can't) and I found this, and many more of them. I already have one, but I did not realise there was a wheen of them. I don't want any more, but tell me about them. Was there one for every episode?

And authorised, or fan? 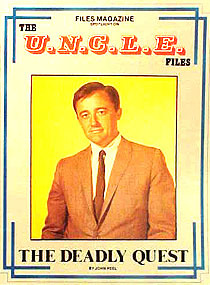 Someone is looking for trouble...

cause it made me think of you all.
Sorry, super cheesy.
But I know you are rolling your eyes in an affectionate kind of way.

Here's an up-dated list of the non-NCIS McCallum television sightings: