Cousin Alton asked me this, so I thought I would pass it along...

Do you take photographs? Do you use a camera or phone? When was the last time you used actual film?

This was the MUST HAVE gift for Christmas in 1967. Hang on through about 30 seconds of talking for the jingle. I still sing along with it (yes, hopeless, I know)

A LJ friend, itsjustc, is a finalist in the interactive LJ game, Dog-Eat-Dog. If she wins the final challenge, she will get a year's free subscription to LJ. The final challenge is simple: get as many people to vote for her as possible.

Cousins, please help out a lovely person by going to the site and casting your vote for itsjustc.

Kind of naughty, but funny and the guys are doing it just for you.

Do you plans for tomorrow night?

....is what we're going to making today fair cousins.The Mince Pie was once described as "an invention of the Scarlet Whore of Babylon"....seeing as ALL my cooking could be described thusly it's nice to have this lone opportunity to make something authentic to the original purpose of the recipe. Lookie even I can make them look half-decent, they are very easy; 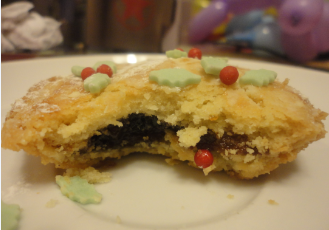 Seeing as my description of the recipe would start with "you just get a wad of butter and mix the other stuff into it" I'm sure the BBC recipe is more useful [it describes itself as childproof so it can't possibly go wrong]
http://www.bbcgoodfood.com/recipes/2174/unbelievably-easy-mince-pies 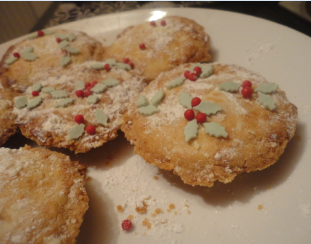 Like, these are the things you bribe Santa with, so they have to at least look like you've made an effort to please him. If you actually want a food that symbolizes Christianity at Christmas then this is useful. They originate in the Holy Land, and when the Knights of England went on the Crusades in like 1250, they found massacring unbelievers made them a bit peckish but luckily the unbelievers also had a very tasty way of mixing spices, meats and fruits together. The heavy spiced element is supposed to represent the spices in the gifts of the Three Kings who traveled from the West to the Holy Land [thus mirroring their own Kingly mission of traveling from England in the West to the Holy Land on a mission from God you see] Anyway, you're supposed to put 13 ingredients in the filling to represent Jesus and the Disciples - but I'm not sure exactly how that's supposed to work and if you're missing some of the less famous Disciples like Bartholomew or whatever, I'm sure no-one will notice. The Puritans infamously hated Mince Pies and tried to suppress them cause they were the work of the Devil or something, but after the whole PR disaster of the "banning Christmas" incident they all kind of sodded off to go and build America and the mince pie was mostly safe to move in it's own Satanic way after that.

So why not celebrate this season of goodwill and peace to all men with a snack that has been the sustenance of choice for Religious Wars for over 800 years. It goes spectacularly well with tea. 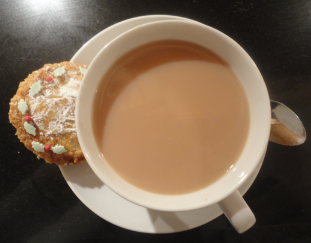