How was your March? What was your high and low? Did you have anything incredible happen or were you just ready to be done with it?

If you are going to join us in reading the MFU novels, please take a moment and vote here.

I've been on to LJ about my photo posting difficulty. They came back to me with this reply,

Thank you for your inquiry. A change was made to the functionality of Scrapbook so that images uploaded will respect the default security setting defined for new entries. Since you have the default minimum security set to Friends Only for your journal - http://www.livejournal.com/manage/settings/?cat=privacy - your images also initially upload as Friends Only as well.

You'll need to edit any images you want to be public and adjust their security level accordingly.

So hopefully, the people who aren't on my friends list will be able to see a yummy picture of DMc, as well as those who are. 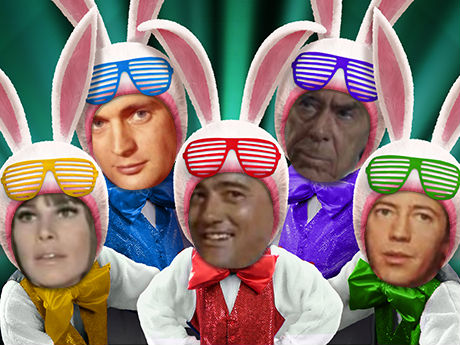 The Sunday recipe slot seems to have lapsed, but as I have an urge to make a Simnel cake I thought I'd share the recipe. I know it's not Sunday, but I though I'd post it now in case anyone would like to make one for Easter. :-)

Simnel cake is traditionally eaten the UK over the Easter period. It's a light fruit cake made with spices, dried fruit, zest and candied peel, and with two layes of marzipan (almond paste), one in the middle and one on top, which is lightly toasted.

It's history goes back to medievel times when different towns had their own recipes and styles of cake. In later centuries it also became associated with Mothering Sunday, the middle Sunday of Lent, when serving girls would be allowed to go home to visit their mothers and would take a slice of cake for them.

The cake was traditionally decorated with dried fruit and flowers, but in Victorian times eleven balls of marzinpan were added to the top to represent the disciples (minus Judas).

Anyway, it's years since I've made one and it's dead easy.

I am happy to report that all the Gen Zines have sold!
I want to thank the fabulous fans!!

I have some Gen and Slash Zines for sale.

This listing is for Gen will post a separate list for the Slash stuff.
All are originals. Most acquired at Media West Con in the mid 90s.
As I am getting older and don't want these to end up in a landfill am pricing
them to move. If you want more info on
something that interest you I will provide what is available inside the zine. Without further adieu here is the list. First come first served.
Some of these maybe available on line if so I will remove from the list.

There are a few more but I will type that list another day.

As you can tell from the price I am motivated to sell. Purchaser will be responsible for
postage and handling. Sending via US mail. So please no international request. I have a paypal account. So if you are interested in anything please let me know at pschase1@yahoo.com

Again these are originals and all in good or very good shape.

. . . but I bet there's quite a few of you who wouldn't mind a life-sized Benedict Cumberbatch, made out of chocolate.

Here is the listing for the slash. These will not knowing be sold to minors.


A Matter Of Trust Clotilda Willard this is a pint size zine. Book size vs magazine size

False Images Alexi Tesla pint size zine. In rough shape cover is missing but all pages still binded. Front page and back page (both list info not related to story have paper discoloration) this is very dark story so be for warned! SPOKEN FOR

White Nights Alexi Tesla the pages are all here and the binding was messed up so I had to unbind. But all pages are accounted for. SPOKEN FOR

That's it for now.
First come first served. If anything interest you and you want further info. I will try to provide.
Contact me at pschase1@yahoo.com
Collapse