I was talking with my friend in Scotland and she was telling that she'd once met David McCallum and he was very rude and brusque with her. She later met Stephanie Powers and found her charming.

I've met David McCallum and he was funny and gracious and I commented that perhaps he'd been having a bad day previous (not feeling well, fight with the wife, etc.).

That got me curious. Anyhow one here have a story that they would like to share about meeting someone famous (maybe not an actor, but a writer, singer or athlete or so on)?

There's an interesting article recced by k1p2psso in MFU short stories site today you may like to read. It's dated March 4, 1967, in the Chicago Tribune. Here's the link-</a>http://archives.chicagotribune.com/1967/03/04/page/75/article/too-busy-for-broken-bones</a>

So while all the writers of MFU fics torture and cause the boys pain, we can see they really didn't need any help with that. The job of acting was tuff enough. Here's part of the article- 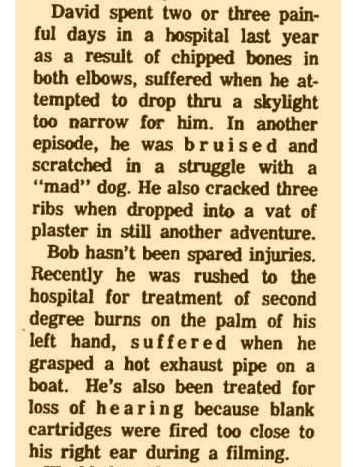 We know Robert's ear problem stemmed from David firing his gun in the enclosed halls of the headquarters set, but I've never heard of these other injuries. Have you?
Collapse