“What are you doing Napoleon?” Illya asked his partner who had a pencil in his mouth while leaning back in the chair thinking.

“What is on this list that so important that you are not working on those files.?”

Napoleon held up a piece of junk mail that offered a dozen roses for only $5.99. 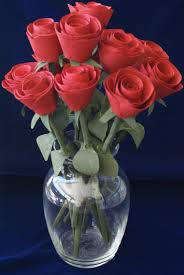 “Need to decided how many of these I need to order to ensure dates for the next month.” He explained before adding a new name on the list.

Shaking his head, Illya asked “You are not serious, are you?”

“The ad says for your special someone. You are making a list.”

The door to the office slid open admitting an angry secretary who slammed a box of chocolate on Napoleon's desk.

“I don't appreciate the fact that Sarah and Michelle received the same thank you gift. You said I was special. You can forget about our date next week.” The secretary yelled as she stormed out of the office.

Hearing a smirk, Napoleon rounded on his partner.

“Say one thing and you'll be on night duty for the next month.”

“Not saying a word,” Illya replied smiling as he went back to his files.