Reply to One from the Vault. Couldn't resist reposting this for you Spike!-

Napoleon Solo suddenly realized he was getting stared at as he walked along the busy corridors of headquarters.

He was used to the ladies eyeing him, and indeed it was a bit of a stroked to his ego as he always tried to be dressed and keep himself attractive.

Just as the ladies always tried to look their best, he did the same. He was raised that way, good grooming and such, but his penchant for fine clothing went beyond that.

He’d been told on many’s the occasion he was the best dressed agent in U.N.C.L.E.

The doors to the Canteen slipped open, allowing him to saunter in to fetch his morning coffee and bagel. There he spotted his partner seated in the corner at their usual table, drinking his tea and reading a newspaper.

“Good morning,” Napoleon greeted as he walked over, mug in hand, having walked the gauntlet of stares and now giggles from the ladies present; it was beginning to become unnerving.

“I am shocked you are showing your face in public today,” Illya said.

“Do you not notice the stares and laughter that are being directed your way?”

“Well now that you mention it?”

“I think you need to see this morning’s copy of the Daily News,” Illya handed him the newspaper, opened to a particular page.

There Napoleon saw his image plastered in an advertisement for something called ‘action pants.’ 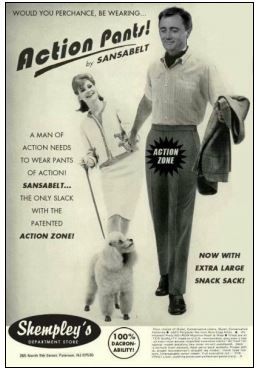 “What the hell?” Solo blurted out before he came to the realization of what had happened.

Napoleon’s face blanched. “Those photographs from the shoots they’d taken of us when we infiltrated that modeling agency, someone must have gotten their hands on this one. Oh nooo.”

“Hmm, yes,” Illya grinned.”Looks like your ‘action zone’ is getting more attention than usual.”

“Oh my Gawd,” Wanda rushed up to Illya. Did you see this?”

“Yes we have,” Napoleon responded through clenched teeth.

“No I mean this,” she smiled, holding up an advertisement in another newspaper. 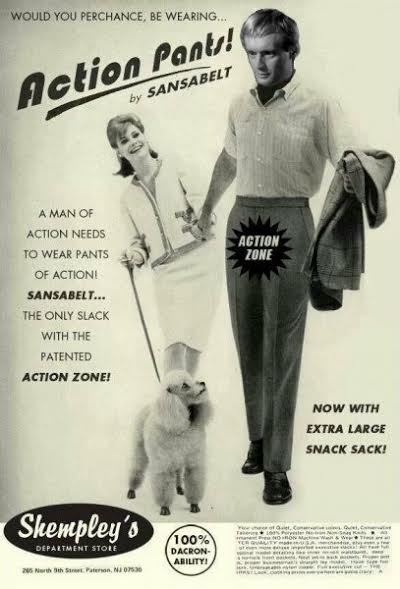 *thanks to Avery11 for her clever manips